21 Not so Spooky Castles

Castles … they remain a modern day link to Kings, Queens, and Knights of the past. Sometimes if the castle was the home of historical figures like Count Dracula they can even be quite spooky. Below are 20 castles that showcase a wide variety of styles from across the globe, and one that locals believe might just have belonged to a certain vampire …

Peles Castle is Neo-Renaissance castle that was built in a particularly beautiful part of Romania’s Carpathian Mountains between 1873 and 1914. King Carol I of Romania fell in love with this particular stretch of rugged terrain and decided to build the castle in 1866, which, according to architectural technicalities, is actually a palace due to its lack of defensive fortification. Peles Castle is widely regarded as one of Romania’s national landmarks. 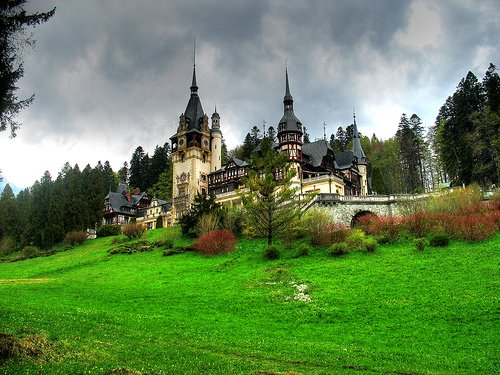 The Neuschwanstein Castle is a 19th-century palace that was constructed in Southwest Bavaria, Germany, and it has become one of Germany’s most popular tourist destinations. Commissioned by Ludwig II of Bavaria as a retreat and homage to Richard Wagner, the castle has become the most photographed building in Germany, even though photographs of the interior are not permitted. About 50 million people have visited the castle in the last 120 years. 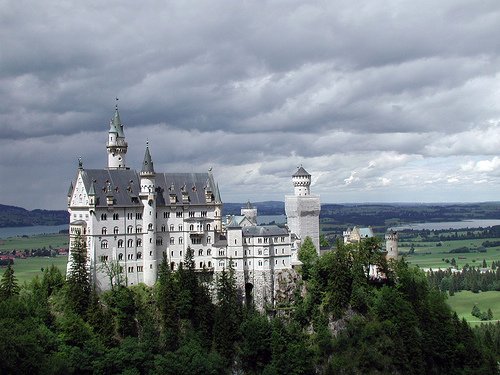 In Lake Geneva is the Chillon Castle, which is also known as the Chateau de Chillon. This castle is comprised of 100 individual buildings that were connected one by one over time. The history of the Chillon Castle dates back more than 800 years. 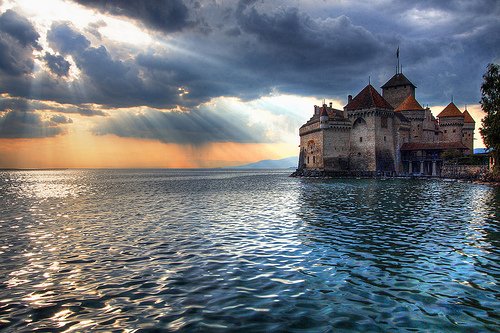 Mont Saint-Michel is a rocky island located off the coast of Normandy, France, and it is home to an abbey of the same name. Designed in the Romanesque architectural style in the 11th century, the abbey is known for a variety of underground tunnels that were built in order to support the otherwise-overwhelming weight of the church. Throughout the rest of the Middle Ages, Mont Saint-Michel would undergo various reinforcement efforts. 5. The castle of Neuchâtel

Neuchatel is a scenic town in Switzerland whose name, in Old French, literally means “new castle.” The castle of Neuchâtel, which watches over the city from a high vantage point, was originally constructed in the 10th century by Rudolph III, King of Burgundy. Even today, the castle is still used as a place for local government officials to meet and do business. 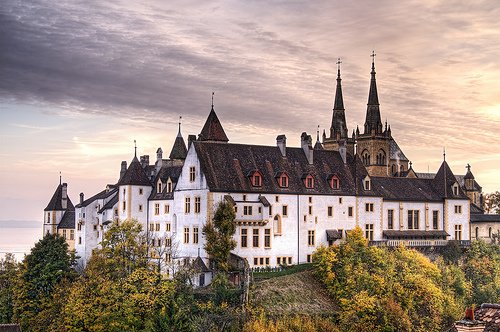 Schwetzingen Castle is a German palace located in Schwetzingen in the state of Baden-Wurttemberg. Known for its huge, gorgeous gardens, as well as for the ornate charm of the castle itself, Schwetzingen Castle was originally created as a summer home for Karl III Philip and Charles Theodore. The castle was built on the grounds of a hunting lodge in the early 18th century. 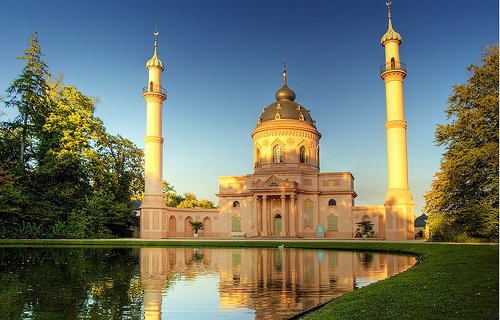 Osaka Castle originally known as Ozakajō is Japan’s most famous caslte, and played a key part in the Unification of Japan under Toyotomi Hideyoshi.Today the castle is a popular tourist attraction especially during the cherry blossom bloom. 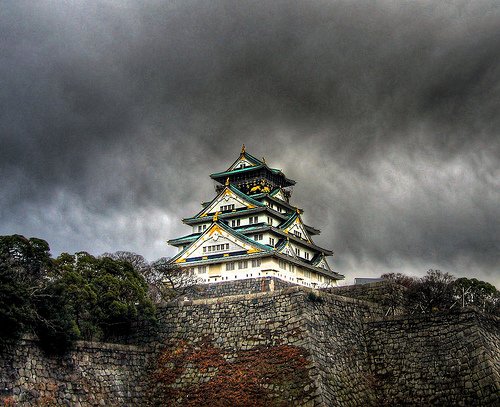 Egeskov Castle is located in the southern part of Denmark’s Funen Island and it is Europe’s best preserved Renaissance water castle. While Egeskov’s history dates all the way back to the 14th century, the structure itself was not erected until 1554. The castle was constructed during a time when civil unrest made it necessary for homes to be fortified, hence the defensive architecture and the surrounding water. 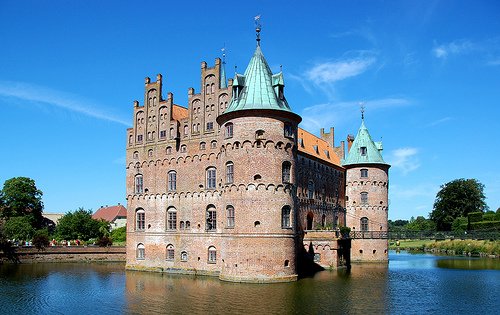 Located in the town of Chantilly, France, the Chateau de Chantilly is a historic chateau comprised of two attached buildings, the Grand Chateau and the Petit Chateau. The Institut de France owns the building and allows the public to visit. Construction of the estate began in 1484, but the building underwent several changes and even had to be reconstructed after the Grand Chateau was destroyed during the French Revolution. Dunrobin Castle is located in Scotland’s Highland and it serves as the seat of the Countess of Sutherland and Clan Sutherland. While the castle was originally constructed in the 1300s, the castle as it appears today mostly results from extensive renovation in the 19th century. Architecturally, the castle combines French Renaissance characteristics with traditional Scottish architectural considerations. 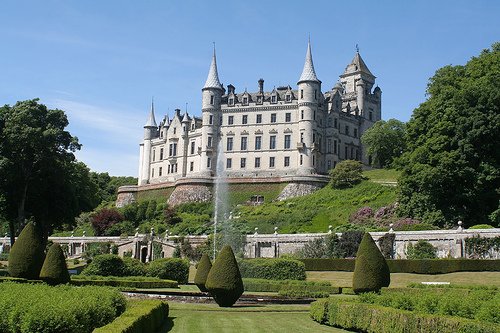 Windsor Castle is the largest castle currently with full time residents still living in it. It dates back over 1,000 years to the time of William the Conquerer. It currently serves as one the three primary residences of the British Monarchy. The Chateau de Perrifonds is a castle located in the Oise department of France. Although it underwent an enormous restoration effort in the 19th century, the Chateau de Perrifonds retains most of the architectural similarities to a defensive fortification from the Middle Ages. The castle was originally built in the 12th century and would change hands through several families throughout the rest of the Middle Ages. 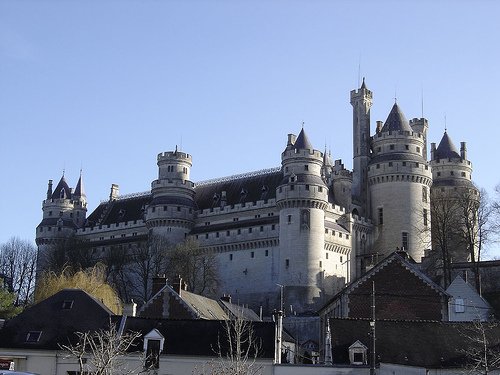 Nestled in the hills above the Moselle River in Germany, the Burg Eltz is a medieval castle that is still owned by a branch of the same family that constructed it back in the 12th century. The castle is divided into several parts, which are then shared by the various heirs of the castle. Burg Eltz incorporates a variety of architectural styles, such as Romanesque and Gothic. Kylemore Abbey was founded in 1920 as a Benedictine monastery on the grounds of Kylemore Castle, which was located in Connemara, Ireland. The Abbey was meant to serve as a place of refuge for Benedictine nuns that fled Belgium during World War I. The structure was built between 1863 and 1868 as a private home for a wealthy politician, but the politician did not spend much time at the castle after his wife passed away. 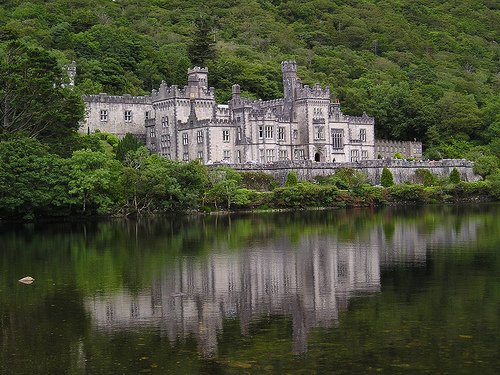 15. Castle of the Mendoza

Manzanares el Real is a town with 6,140 inhabitants located in the northern part of the Community of Madrid. The pride of the town is the Castle of the Mendoza, the most well-preserved castle in the Community of Madrid. Construction of the castle began in 1475 and it was finished shortly thereafter, and since then, the castle has been featured in a variety of motion pictures, such as El Cid. Located in Cork Ireland, Blarney Castle has been the location for many castle’s over the years. The current version was constructed by the McCarthy clan in the mid 1400’s. It’s currently home to the Stone of Elloquence more commonly known as the Blarney Stone. 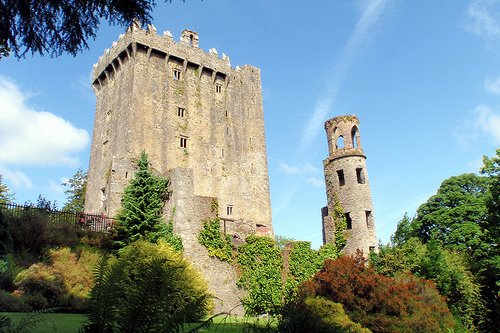 The Castle of Monfort is located in the Dordogne River Valley and it was originally constructed by the French as part of their war with the British. The purpose of the castle was to allow the French to control traffic down the river, giving them a strategic advantage. However, the castle ended up being destroyed several times, having to be rebuilt each time. Edinburgh Castle is a military fortification built on top of Castle Rock. The area has been settled by humans as far back as 9 BC. The area has long been of strategic military value and numerous seiges over hundreds of years have caused the fortifications to be destroyed and rebuilt several times. The oldest of the buildings still standing date back to the 16th century. Eilean Donan is a small island located in Loch Duich, which is in turn situated in the Highland region of Scotland. Lying half a mile from the Scottish village of Dornie, the island is connected to the mainland by a footbridge and is characterized by the medieval castle that sits atop the island. The castle was built in the 13th century to protect against Viking raids and underwent restoration from 1919 to 1932. Bamburgh Castle is located on the coast at Bamburgh, which is located in Northumberland, England. The first written reference to Bamburgh Castle was made in 547, but historical evidence shows that the castle had been in use for at least 100 years before that. The castle and the surrounding areas have come under the scrutiny of archeologists in recent years, those who seek to learn about the history of Bamburgh Castle and the people that inhabited it. Bran Castle sits on the border between Translyvania and Wallachia in modern day Romania. The castle is considered by some to be the home of Vlad the Impaler, more commonly known as Count Dracula. There’s is little historical evidence to support that he lived here during his reign, as much of his attention was focussed on Poienari Castle (which lies in ruins). However the current owners of the castle market it as Dracula’s Castle complete with a museum and other historical exhibits.