Are you planning to go for a trek in Nepal? Thank goodness you’re here. Selecting the best trekking route in Nepal might seem easy. On the contrary, there are many treks in Nepal that range from long routes, short routes, and easy routes, challenging routes, to cultural and spiritual tours. And, the choice of trek might depend on other factors such as whether it’s your first time or you are a veteran. 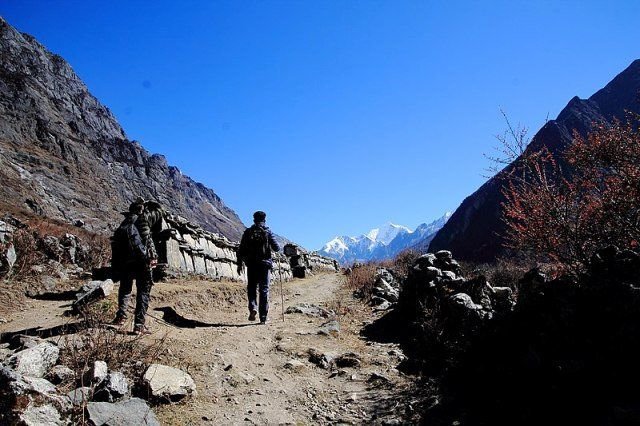 To make your trekking decision easy, we provide you with a comprehensive guide on the 7 best trekking routes in Nepal. Do not forget to take with you your trekking poles. Let’s get started:

The Everest Base Camp Trek gives you the opportunity of climbing to the peak of the world’s highest mountain. At the Kala Patthar majestic point you can experience not only the heartbeat of the Himalayas but also many other high peaks above 8,000 meters such as the  Lhotse, Cho Oyu, Pumori, Nuptse, Amadablam, Thamserku, and the adoring mountain valleys. Then there’s the Khumbu region with its magnificent Glacier that stretches 12 kilometers as well as the 30 kilometers Ngozumba glacier. While at it, you’ll be amazed by the Sherpas, Namche Bazaar, Dingboche, and the Tengboche villages not to mention the Sagarmatha National Park.

The Annapurna base camp trek stands at 4,130 m, and it’s surrounded by magnificent snow-capped peaks that include the supreme Annapurna at 8,091m, Annapurna south, Annapurna Fay as well as the Annapurna III. Other equally eye-catching spectacles include the Khangsar Kang, Gangapurna, Tent Peak, Hiunchuli, and the famous Machapuchare. The opportunity to watch the sunrise over the Annapurna mountain range awaits you at the Annapurna Base Camp.

If you are looking for a trek with natural beauty, the Manaslu Circuit trek is the perfect answer. Mt. Manaslu is the highest point in the region at 8, 156 meters. In case you don’t know, it’s the eighth highest mountain in the world. To get the best of the Manaslu Circuit trek, you had better begin by visiting the UNESCO village sites at Kathmandu. After that, you can commence your 18-22 days trek at Arughat. The best seasons are March to May and September December. The main activity is trekking and hiking. While at it, you get the chance of a lifetime to enjoy the natural beauty that includes Glacier Lakes as well as hills that go upwards of 500 meters.

Also known as Poon Hill Trekking, Annapurna Panorama takes you through a variety of landscapes as you view mountains and the dense rhododendron forests. The main activity in this trek is the hike to the Poon Hill. While at it, you get to mingle with the communities as you pass through the villages. A part from the dense forest, and the sound of the birds chirping, you also have the view of the highest peaks including the Annapurna I, II, II, III, IV, and South, as well as the Dhaulagiri, and Nilgiri.

If you are looking to explore the highest fresh lakes in the world, you need only participate in the Gokyo Lake trek. In 16 days, you’ll come face-to-face with the pristine blue and green sparkling Gokyo lakes at around 5,000 meters. At Gokyo RI, you’ll have the panoramic view of some of the Himalaya’s peaks among them mount Everest, Makalu, Kanchenjunga, Lhotse, and Cho Oyu. Some of the villages you’ll pass through and interact with the inhabitants are the Dhole, Phakding, and Namche Bazaar.

Also known as the Everest View Trek, this trek not only explores the Sherpa villages and its culture but gives you an incredible opportunity to view the highest mountains in the world. Hence you’ll see Mount Everest at 8,848m, mount Lhotse, and Mount Cho Oyu. The trek is recommended for beginners as it takes a few days and does not involve ascending high altitude.

This trek explores the Langtang Valley situate to the north of Kathmandu and the South of Tibetian border. While on your trek, you’ll view various adorable landscapes and sceneries as you follow the river up the valley. Also, you get to experience dense forests notably the rhododendron forest. While in the forest, you see monkeys, bears, and even leopards. You’ll also have the spectacular views of Langtang Lirung, and the Ganesh Himal range. Your experience with Tibetian culture in the Tibetian villages will be a memory to behold.