Secrets Hidden Of The US One Dollar Bill

Hey friends searching around something interesting i have found one super article in one of our favorite websites littlethings.com. Did you know that maybe the money crumpled in your pocket might be telling you something. Especially the US one dollar bill that is very popular about the hidden mysteries years ago and the hidden meanings behind the symbols on the one-dollar bill remain some of America’s greatest puzzles. If you are curious and what to learn and to solve a few of the mysteries than take a look below. You will learn interesting secrets hiiden of the US one dollar bill. 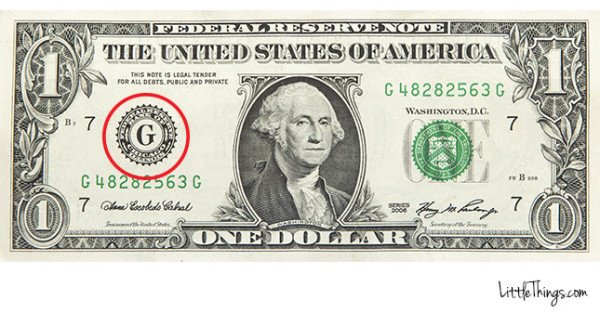 Only for this item there is a logical explanation. The big letter “G” is one of many letters that represent exactly which Federal Reserve bank was responsible for printing. In this case, the “G” stands for Chicago. 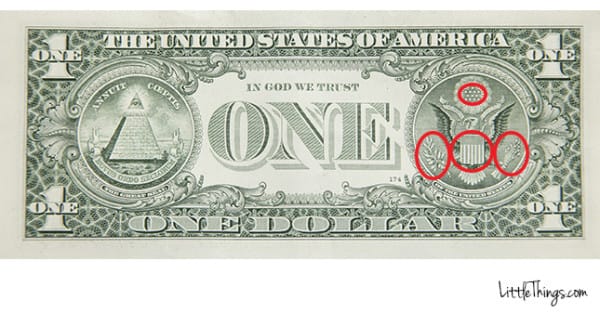 The eagle appears to be clutching 13 arrows, as well as an olive branch with 13 berries. The eagle wears a shield with 13 horizontal stripes and 13 vertical stripes. Above the eagle, there are 13 stars.
Some believe that the image holds some type of evil or satanic meaning, perhaps hinting at a goal of world domination.

However, scholars believe that the obvious answer is the correct one: that the number 13 is representative of the 13 original colonies. 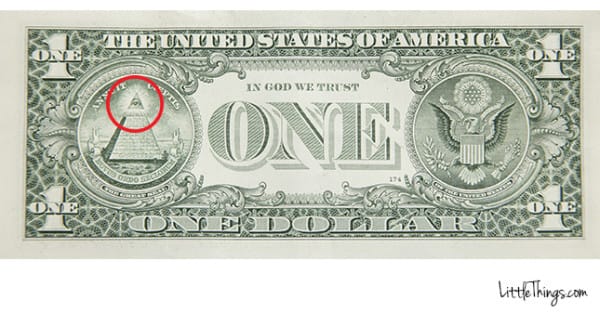 The eye at the top of the pyramid is hidden right in plain sight, but its meaning has been shrouded in mystery since it first appeared on the one dollar bill.

The eye appears to be floating and emitting large rays of light. So what could this symbolize?

Some argue that the eye represents the presence of God watching over America. 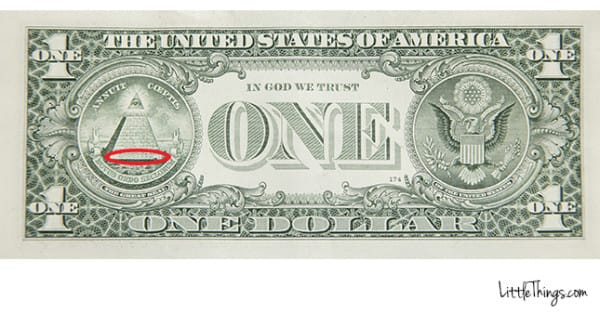 If you look closely at the base of the pyramid, you’ll spot a very long series of letters: MDCCLXXVI. Actually a Roman numeral that stands for the number 1776. It would be quite difficult to read too much into that number, considering that 1776 is the year that America finally declared its independence. 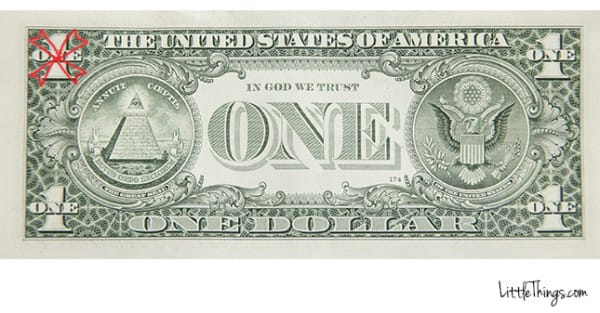 If you look in the corners of the back side of the bill, you’ll be able to spot a very distinct cross or windmill-like shape behind the number “1.”

Many believe that this symbol is the shape known as the Maltese cross — which some believe to be a hidden reference to the famed Knights of Malta.

These “Knights” date all the way back to the Middle Ages, and still remain active today. In 1798, an island fortress belonging to the Knights of Malta was captured by Napoleon, sending many of them fleeing to America.