From years ago we are getting the resources of the Earth to leave to earn to make profit to build buildings e.t.c. Do we really care how we explore our mother nature. Do we really think about the future.
In recent decades, NASA has been tracking the major transformations we’ve wrought via satellite. In its “Images of Change” series, the agency has posted a number of before-and-after images showing the exact same rainforest or glacier or city years or decades apart. The differences are often breathtaking

Left: May 25, 1985. Right: June 7, 2010. The Paraguay-Parana River system is the second largest river system in South America — second only to the Amazon. More than 100 million people and some of the rarest species on Earth depend on its waters for survival. These images show the rapid growth of Dubai, in the United Arab Emirates, between 2000 and 2011. To promote beach tourism, the city built hundreds of artificial islands along the coast using sand dredged from the seashore. Rocky barriers were put in place to protect them from erosion. The two most famous islands are shaped like palm trees. As the images above show, the growth of Dubai on land has been no less dramatic, with barren desert replaced by irrigated land and roads. 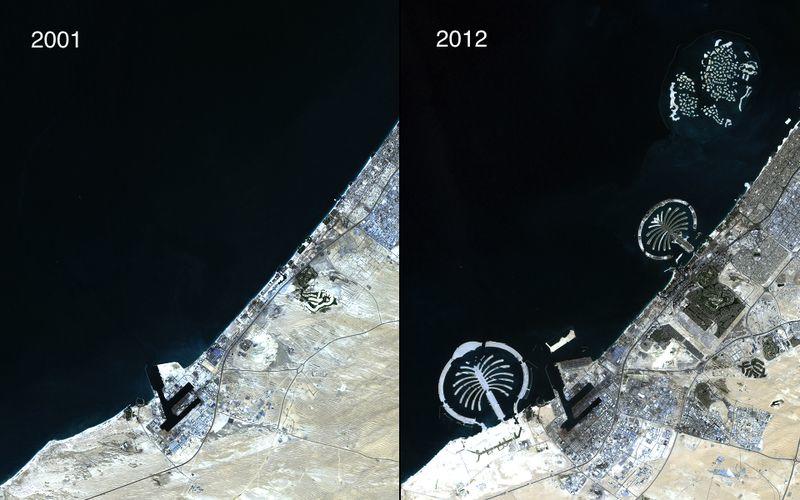 3.A man-made fire rages in Namibia

The white area is the Etosha Pan, a salt-encrusted lake bottom. The dark brown area shows where a fire burned in June 2012

4.Efforts to tame the Colorado River hit a snag

During the 20th century, Americans built a complex system of dams and reservoirs to tame the river, providing a steady source of freshwater for farms and cities like Phoenix and Las Vegas. Water from the river is divided up among states under an elaborate set of rules.
Back in 1999, the lake was filled high, with plenty of water for nearby counties. But in the early 2000s, a brutal drought arrived and water levels began dropping. As of May 2014, the lake was only at 42 percent capacity 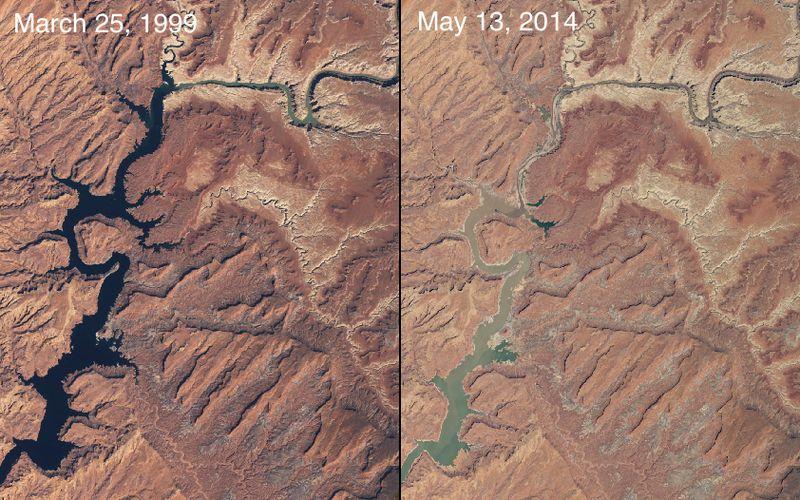 One of the most dramatic ways we’re transforming the planet is through global warming. And a great place to see its effects is through the melting of glaciers and ice sheets around the world.
The images above show the Columbia Glacier in Alaska, which flows directly into the sea. The glacier had stayed more or less fixed in place between its discovery in 1794 and 1980, but then suddenly began shrinking. Between 1986 and 2014, its nose has retreated 12 miles north, making it one of the fastest-receding glaciers in the world. 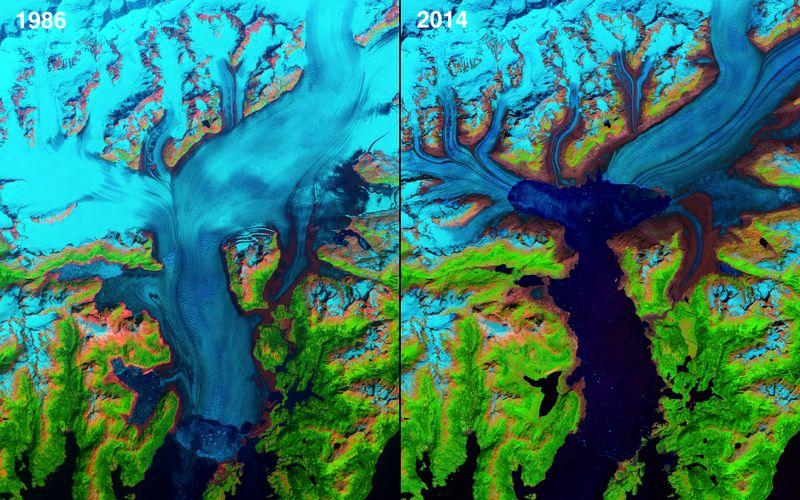 6.The US cleans up its air pollution

Not all of the ways we’re transforming the planet are negative. Here’s some good news: Satellite data from NASA, shown above, revealed a huge reduction in nitrogen dioxide pollution from cars, trucks, power plants, in the United States between 2005 and 2011.

7.The ozone layer thins — but then starts healing

Sometimes it’s possible to stop an environmental catastrophe before it’s too late. Back in the 1970s, scientists first realized that we were rapidly depleting Earth’s stratospheric ozone layer, which protects us from the sun’s harmful ultraviolet rays. The culprit? Chlorofluorocarbons (CFCs) — chemicals that were widely used in refrigerators and air conditioners.

As the NASA images above show, between 1979 and 2013 these chemicalshad chewed a massive “hole” in the ozone layer above Antarctica, and the damage was poised to spread further north.
Happily, this apocalyptic scenario never came to pass. Scientists uncovered the problem in time. Under the 1987 Montreal Protocol, world leaders agreed to phase out CFCs, and eventually the hole in the ozone layer stopped expanding. In 2014, a UN assessment found that the ozone layer is just now starting to heal — and should be back to its 1980 levels by 2050 or so. 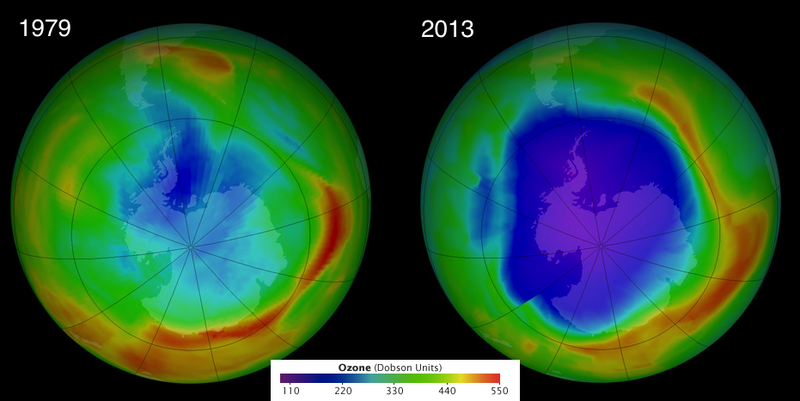 But as the images above show, things changed significantly after the Second Gulf War. After the fall of Saddam Hussein, Iraqis tore down many of the canals that had drained the marshes. The wetlands were once again fed by the rivers in the spring, and vegetation had returned by 2006 — shown in dark green on the right-hand side. The UN found that the marshes were back up to around 58 percent of their historic levels, and native birds and fish were rebounding.

The Aral Sea, tucked between Kazakhstan and Uzbekistan, was once the fourth-largest lake in the world. Today, after decades of being drained for irrigation, it’s nearly gone.

10.Solar farms sprout up in California

The next big environmental challenge is global warming, which will likely prove much harder to stop than the hole in the ozone layer. It will entail revamping our entire energy system, switching away from fossil fuels like coal, oil, and natural gas and seeking out cleaner sources.

Some places are already taking steps along those lines. The image above shows the growth of the Topaz Solar Farm in central California, a 550-megawatt plant consisting of 9 million panels across 9.5 square miles. It’s a modest step in shifting the state toward cleaner energy. 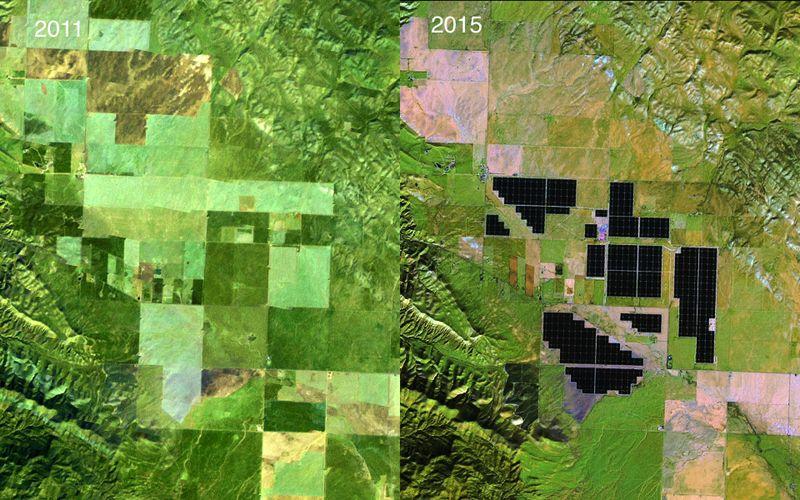