Fortnite has taken the world by storm, especially the gamers. Now it is not just about the game, but the Fortnite skin combos as well. Some of the skins are available in shop rotations and can be purchased using V-bucks, which can be earned or bought using real money.

Another way of getting the best Fortnite skins is by earning tiers in the Battle Pass Season. To show how important skins are to Fortnite players, during the launch of Samsung Galaxy Note 9, those who pre-ordered the phone were given a choice of a Fortnite headset, an exclusive Galaxy Fortnite skin, or 15,000 V-bucks. 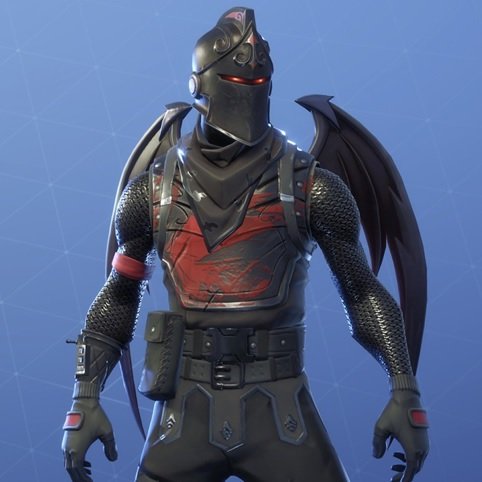 The red and black combo looks great. This is a legendary male skin in the Battle Royale. In addition, it is one of the most popular and cool Fortnite skins. Beside that, the image is similar to an armed knight. The black vest, black helm, and black pants make the authoritarian nature of this skin pronounced. To sum up, this skin can be found in the Fort Knights Set. It is a tier 70 premium battle pass reward for season 2. Unfortunately, this outfit is no longer available but it was one of the best Fortnite skin combos. Hopefully, it will find its way back. 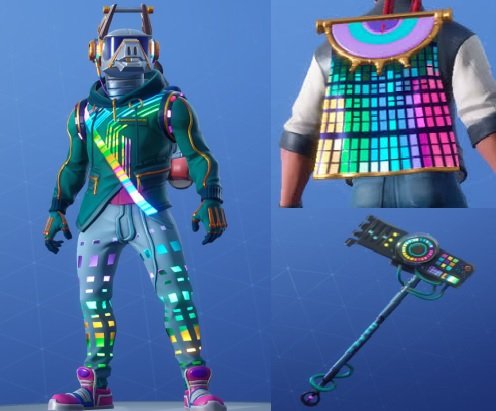 This skin can be unlocked by buying battle pass season 6. The waveform is unlocked when you get to tier 38 in the same battle pass. In addition, this Fortnite skin combo looks great with the Smash up pickaxe. Unfortunately, they can not be unlocked at the same time. 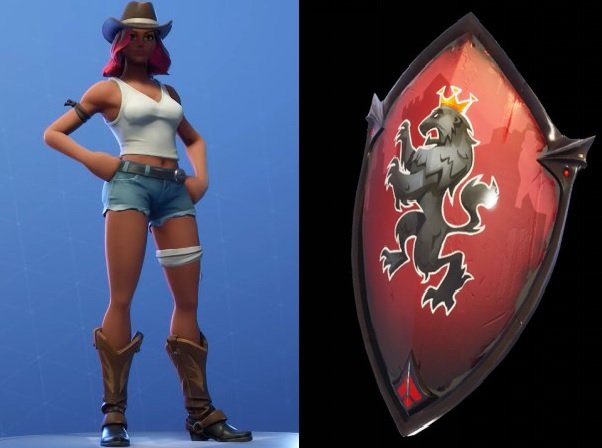 This cowgirl skin is awesome, especially when combined with the red shield back bling. This skin can be unlocked at tier 1 by buying the season 6 battle pass this skin combo looks really great because the shield matches her hair color. 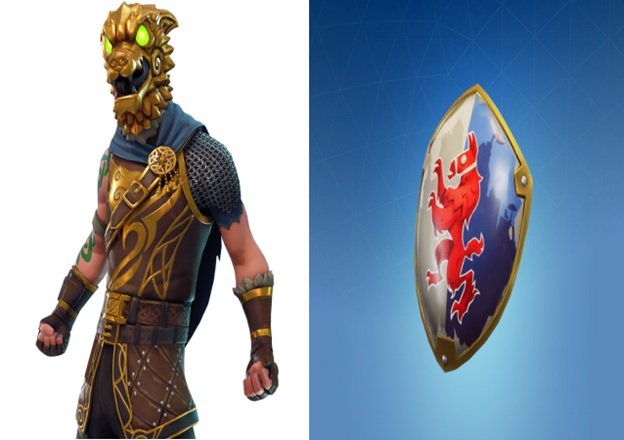 This legendary outfit has a leather and bronze armor. Its bronze wolf head has glowing green eyes. Although the outfit has a cape, it does not have its own back bling. The gold back bling is a great combo for this outfit.

This skin is a part of the Laoch set. Those interested in this skin can purchase it in the cash shop when it is on rotation.

The fable skin looks a lot like a little red riding hood. This skin was named that way since the little riding hood is a fable. Moreover, the red on the skin goes really well with the red shield. This skin is unlocked at tier 14 of the season 6 battle pass. 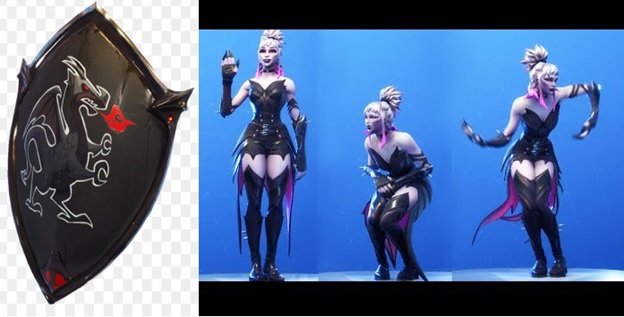 The Dusk skin is unlocked at tier 71 of the season 6 battle pass. The pink, pale purple, and dark colors on the dusk skin look awesome when combined with the black and red colors on the black shield.

This is one of the most elegant and good Fortnite skin combos in this season. The attraction in this combo is in its simplicity. 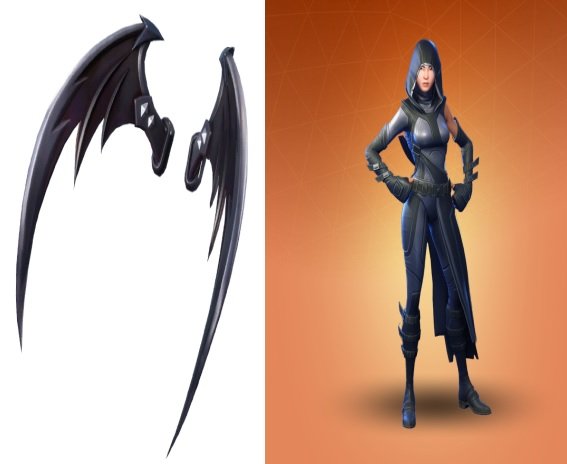 This tight black grey costume goes exceptionally well with the black dusk wings. An all-black outfit always looks good and this Fortnite skin combo is a perfect fit. The Fate skin is a legendary outfit featured on a woman with a black hood.

Black and purple have been well blended to give this outfit a unique style. This outfit is the female version of the legendary Omen skin. This skin is part of the overseer set. It is worth 2000 V-Bucks and it can be bought when it surfaces during the shop rotation. 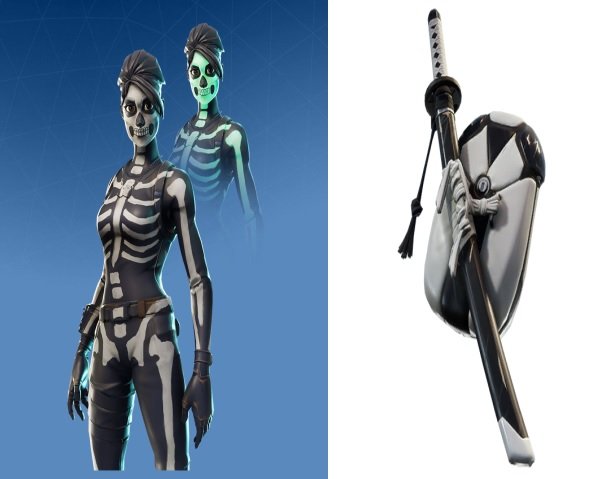 This skin combo looks great when used together with the death valley pickaxes. In the same vein, the Skull Ranger falls in the category of rare outfits in the items shop. It was released during the preparation for the 2018 Halloween season, and has some unlockable designs. Skull Ranger + Ignition is similar to the Skull Trooper outfit. This Fortnite skin comes in two styles, a green glow, and a white glow. However, it is very likely that this outfit will only be available during the Halloween season. 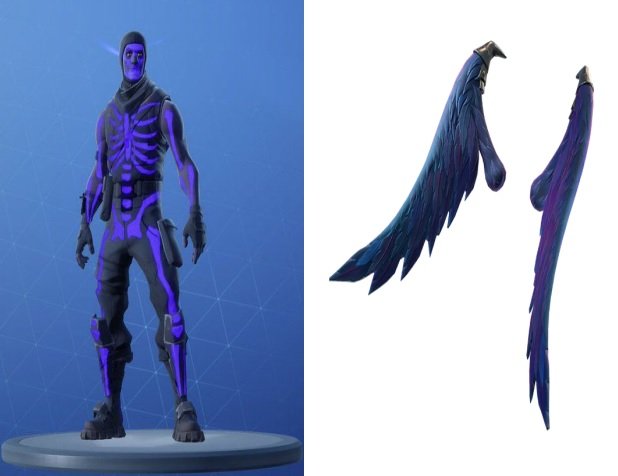 The purple skull trooper combines well with the dark wings. This skin was added by Epic games on October 12, 2018. Those who had this skin before it became an item in the shop get to have the exclusive purple light. Players who buy it now, get 1 free glowing style. On the other hand, those who do not have this Fortnite skin but would like to have it can get it during the limited period in which it is unlockable. It costs 1,200 V-Bucks. The commando skin has a similar design to the pathfinder outfit. The difference is in the color theme. This outfit is made up of a black tank top shirt with green pants. The female also has dark boots and gloves to complete the look that gives her a military tag name.

The commando looks good with the dusk wings. It is featured among the uncommon outfits in the items shop.

To sum up, there are hundreds of Fortnite skins. They appeal to the players based on color preference, cost, and availability. However, these are just some of the possible best skin combos in Fortnite. Some of the skin combos are great for camouflaging. Others are more striking and easier to spot. Likewise, you get to choose which Fortnite skin combo suits your style and budget.

Previous What Makes Madrid The Best-Kept Secret In Europe?
Next Whimsical Winter Manicure That Will Make Your Nails Stand Out